Two members of the Clan featured prominently in

Her Majesty’s 90th Birthday Honours List both being awarded MBEs. 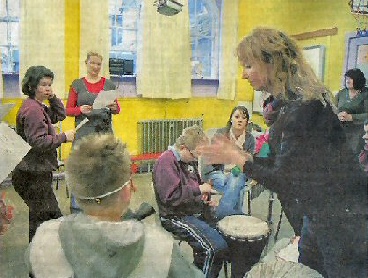 Mrs Sarah Margaret Katharine (Alpha) Munro, For services to the Arts and people with additional support needs in Ross-shire

As a family we are especially thrilled and so pleased that all Alpha’s work over the past 40 years with those needing additional support and her shear dedication to the Arts in general and in particular to 25 years of teaching and promoting traditional fiddle music amongst the young has been recognised.

Calum Mackintosh Munro, co-founder of the Highland Cross For services to charities in the Highlands.

We are obviously delighted for Calum and the tremendous success the Highland Cross has become and the vast amount of money it has raised over the years for charities throughout the Highlands.

A Highland duo who de­vised a spectacular event that has raised millions of pounds for charity have both been made MBEs.

Gerry Grant and Calum Munro, who worked in the region's fire service, jointly came up with the idea of the Highland Cross, the gruelling 50-mile duathlon that tra­verses the Highlands from Kintail to Beauly by foot and bicycle.

They were over-whelmed by news of their reward for their part in an annual fixture which has grossed a total £4.1 million.

The two grandfathers said yesterday they were surprised and delighted to feature in the birthday hon­ours.

Each modestly insisted it was recognition of the many people who had con­tributed to the success of the event.

Mr Grant, 80, said: "I'm astounded. Calum and I can't praise our extraordinary volunteers enough. They're abso­lutely marvellous. I've been very fortunate to have played a part in an event rooted in the High­land community. "I had a fairly mad idea and Calum vastly improved it."

The catalyst was a jour­ney Mr Grant once took from Strathglass to Kyle for a shinty match on which he carried his bike over the hills.

Studying a map together some time later, the pair de­cided to establish the chal­lenge, in reverse west-to-east coast fashion, as a one-off charity event

Thirty-three years on, hundreds of charities across the region have ben­efited.

Mr Munro, 62, was "em­barrassed" by the acknowl­edgement of his role.

"This was a big surprise and humbling, but it's lovely," he said. "I'm hugely honoured but this is really about the folk who dont get recognition, who actu­ally make Highland Cross happen.

"There are 60 or 70 of our own volunteers, some of whom have been commit­ted since we started. There are generations of families who have supported High­land Cross. 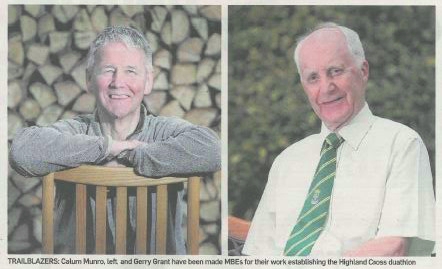