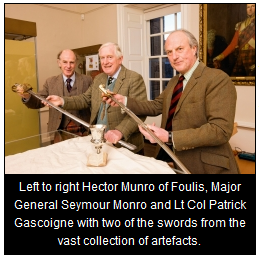 Left to right Hector Munro of Foulis, Major General Seymour Monro and Lt Col Patrick Gascoigne with two of the swords from the vast collection of artefacts.

Clan Munro has donated £15,000 to the Highlanders’ Museum fundraising appeal, with donations from the UK and abroad and contributons from both the Munro Clan and the wider Munro family.

Their donation will be acknowledged by a plaque in the introductory AV room on the ground floor of the museum at Fort George.

Major General Seymour Monro, museum and appeal chairman said: "All three of our original regiments – Seaforths, Camerons and Lovat Scouts – were raised by the Clan Chief or their close relative – and there has always been a strong and natural link between the regiments and the clans which continues today.

"This enduring link is a fundamental element of the heritage of the Highlands and Islands. We are delighted and grateful that the Clan Munro, led by its Chief, Hector Munro and his wider family, has been to the fore in contributing to this museum project. As a member of the clan, I am doubly proud!"

Hector Munro of Foulis, Clan Chief, said: "A clan was an extended family group formed into an elaborate web of relationships by intermarriage and set up for mutual protection and benefit. The destruction of the old clan system was the price of Jacobite failure but it was a simple transition for the natural warrior instinct of the clans to seamlessly reappear in the Highland regiments.

"In the last two hundred years many Munros and twenty-seven of my immediate family have served with distinction in The Seaforth Highlanders and their successor regiments. I am particularly grateful to my relatives, descended from Stirling and Gascoigne marriages for contributing so magnificently to The Highlanders’ Museum Appeal."